What is A Primary Source?

Primary sources are those which were either created during the time period being studied or were created at a later date by a participant in the events being studied (memoirs, for example). They reflect the individual viewpoint of a participant or observer.

Primary sources enable the researcher to get as close as possible to what actually happened during an historical event or time period.

For historians, the distinction between primary and secondary sources can be a bit complicated.  For example, a history of the Great Depression written during the 1950s is considered a secondary source.  However, it may also serve as a primary source for someone researching the 1950s or researching the ways in which historical interpretations of past events have shifted over time.

The important question to ask is whether the work was written or created during the time period under investigation and how you intend to use it.

See a more in depth explanation of this issue written by Michael Earmon, historian and archivst at the Library and Archives Canada .

Chicago-area libraries and archives together constitute a rich repository of primary source material.

To locate books from a particular time period ... 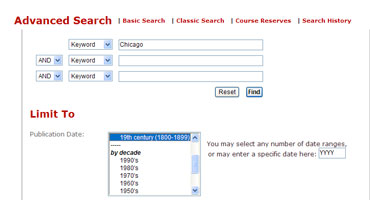 To locate a primary source magazine or journal article...

The following databases index and in most cases provide electronic reproductions of full-text, primary source magazines, journals, and newspapers.

Primary sources include full text of congressional bills/resolutions both passed and not passed, congressional committee hearings, prints, documents and reports, floor debates, proceedings, journals, directories, manuals, voting data, and publications of the support agencies of congress. These official documents are issued by the full congress, either of the houses jointly or individually, or by the committees. Official congressional documents do not include materials issued by the political parties, groups of legislators, or by one individual congress member.

The Benedictine Library is also a depository for State of Illinois resources.